WELCOME to KP Projects CIC, scroll down to see more of what we do…

Huge thanks for #CulturalRecoveryFund support this year, which helped get our projects up & running, evolving & Covid-safe.

We’ll be back touring again in 2022 with The Living Coast Undersea Experience, three Bicycle Ballet Co shows & The Great Pebble Dash.  Scroll down to find out more & hope to see you on a street, park, community centre or school then x

The Living Coast Undersea Experience pilot toured to schools, arts & community venues along the Sussex coast, between February & October 2019.  Have a look what happened HERE or on Twitter.

Unfortunately the huge, Sussex-wide, tour planned for 2020 was unable to go ahead because of the pandemic.  We’re working on redeveloping it, so look out 2022.

It’s been a pretty quiet couple of years, but we celebrated a big anniversary this year (2021):

We also presented The Great Pebble Dash around Great Yarmouth’s High Street Heritage Action Zone for the Out There Arts Festival, alongside a fantastic couple of days of workshops, & in Heathbrook Park & Wandsworth Park for Wandsworth Arts Fringe. 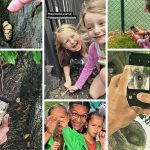 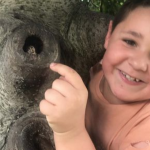 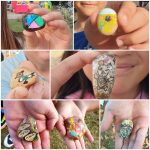 2019 was an incredible touring year for The Bicycle Ballet Co including two major commissions. Chingford May Day Fayre for Waltham Forest Borough of Culture 2019 with And Now; & Re-Imagine: London Car Free Day

Version one of The Living Coast Undersea Experience, a virtual reality dive into Beachy Head West Marine Conservation Zone, between Brighton & Beachy Head,  launched for user testing at vrLAB as part of the #TomTech programme at The Old Market, Brighton Digital Festival 2018. 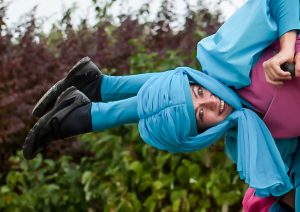 A fabulous 2018 summer season for The Bicycle Ballet Co.  Blazing Saddles went from strength to strength, with performances across the UK & two commissions, from Milton Keynes Pedalling Culture & Lakes Alive, to develop new participation models for the show, more here.

And, Strictly Cycling toured for its epic sixth season, further info – here’s to many more. 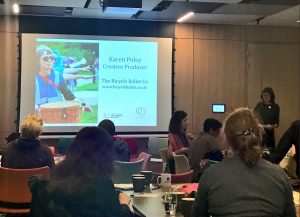 Amongst many inspiring presentations of projects encouraging women & cycling, The Bicycle Ballet Co was honoured to present Blazing Saddles to the 2018 Women & Cycling Conference. We very much hope to develop a project together in 2019

KP Projects CIC is delighted to welcome two new board members: Veronica Stephens Executive Director of Seachange Arts, & artist, producer & educator, Bec Britain.  We will be developing the board over the next few months.

Amazing news! The Living Coast Undersea Experience is up & running with a grant from Sussex Community Foundation’s Rampion Fund, matched by ACE Catalyst Evolve funding. Further fundraising continues for the development of education/information materials & a tour.

Honoured to be included in Xtrax’s ‘Outdoor Arts Hot 100′ celebrating ‘those who help shape, champion, support & raise the bar for outdoor arts across the UK‘ 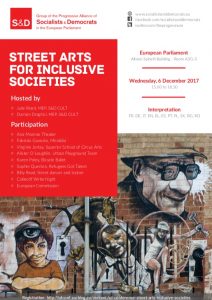 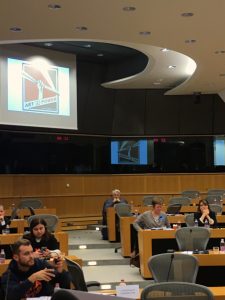 KP presented her outdoor arts work over the last 20 years at the Street Arts for Inclusive Societies Conference in the European Parliament.

Launching an idea for a new show to delegates at the National Outdoor Arts Conference in November 2017.  Working title, The Bicycle Ballet Ballet – an exploration of the beauty, precision & mechanics of ballet & bicycles through the prism of modernism, more info Here 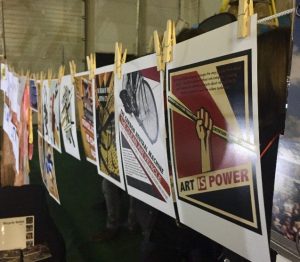 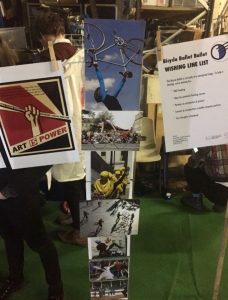 KP presented the Blazing Saddles project to delegates at the Xtrax Shorts event, as part of the Out There Festival Sept 2017.  More info Here

Delighted to announce that KP Projects & The Bicycle Ballet Co have been awarded Catalyst Evolve funding from Arts Council England, as part of the Carrot Consortium with Bureau of Silly Ideas (BOSI) & Red Herring to develop successful & sustainable fundraising models. More at this link: Catalyst

Strictly Cycling has had an amazing summer, touring the UK so far this year.  Stand out top of the bunch was an amazing day with the largest Strictly Cycling performance to date for the final stage of The Women’s Tour 2017 in Trafalgar Square.  More about the show Here

Bicycle Ballet’s Blazing Saddles has evolved & is available for touring, thanks to a commission from Wandsworth Arts Fringe 2017.  The show has been redeveloped as a smaller scale, visual narrative, which unfolds as it roves around a performance space.  More info & a short film here Blazing Saddles Touring Show

NHS Stories – an interactive, outdoor exhibition & part of an ongoing exploration into digital storytelling & new technologies, during the Brighton Festival May 2017.  More at this link:  NHS Stories 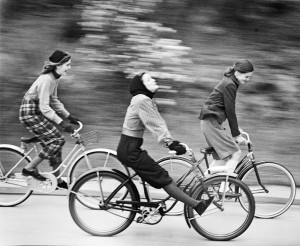 A new Bicycle Ballet show, Blazing Saddles, was created with a group of local women & performed in a series of sites along a bicycle ride, around Dulwich Village on 17 September 2017.  The show was commissioned by Southwark Events, funded by Arts Council England & supported by Tru Thoughts.

FireSpring at Cyclopark was on 26 March 2016. Conceived & developed by KP Projects, as a magical event to celebrate the turning of the seasons & changing of the clocks. The event aimed to transform Cyclopark into a garden of fiery delights with hundreds of fire pots around the BMX track, extraordinary fire sculptures & spectacular firework moments performed by dancers, BMXers & local cyclists.  Sadly Storm Katie was against us, with 74mph winds halting the show early. 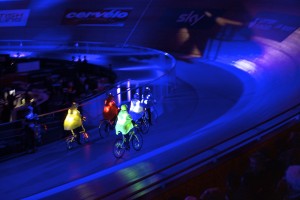 A very exciting, commission took place this week (2nd March), to create a short sequence for the opening ceremony of the World Track Championships at the Lee Valley VeloPark.

FireSpring, an event to welcome back the summer on 26 March 2016, at Cyclopark near Gravesend, Kent.  More info soon…. 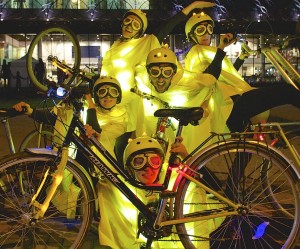 Strictly Cycling has been touring again in 2015, including an Arts Council England supported visit to the Performance International Arts Fair & showcase in Paderborn Germany.

Karen has been appointed Artistic Director for the development of a pilot arts programme in Spring 2016 for Cyclopark, near Gravesend Kent.  The appointment builds on the reCyculture Kent project in 2012, which was based in Cyclopark. 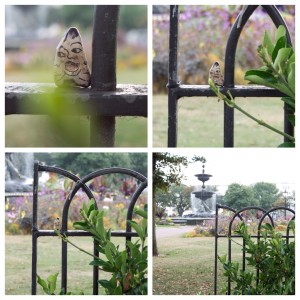 New in 2015, The Great Pebble Dash has been commissioned by the University of Brighton to welcome delegates to the Visual Methods Conference, September 2015.

The Great Pebble Dash is a high speed game around a town or location, to find tiny, ‘pebbleface’ artworks drawn by artist Raysto

Players follow visual clues posted online, matching the shapes, textures and patterns in the landscape, as they are gradually revealed, to find the pebblefaces.

“Suddenly we were looking at the city in a completely new way”  PebbleDasher.

“Lots of fun.  A brilliant idea, loved it!” PebbleDasher 2

In 2014 Strictly Cycling was commissioned three times, by:

*  Belfast City Council, to create a PINK version of the show for Gira d’Italia’s Big Start

The show was seen by an estimated 15,000 people in the streets, in fields, indoors, in monumental locations, in a Carnival & on the Tour of Britain finish line, rain or shine.

An amazing 2013 summer season, with two new shows from The Bicycle Ballet Company created and touring this year, Everyday Hero and Strictly Cycling.

Everyday Hero is a unique outdoor, dance theatre show, performed by a cast of visually impaired and sighted performers.  In a surreal tale of adventure, Vanity, Fear, Happiness, Frustration, Bravery and Curiosity journey through real and imagined landscapes, battling their demons to realise the dream of a tandem ride.

Strictly Cycling is a high impact, strolling/cycle-about performance which plays with the everyday experiences of riding a bike.

Funding has been confirmed for the creation of a new Bicycle Ballet show – Everyday Hero; a unique outdoor dance production, performed by a company of sighted and visually impaired performers.  Exploring universal themes, the show imagines the first solo adventure of a person who has lost their sight, through an exploration of Joseph Campbell’s Hero’s Journey.

2012 was an incredible summer, with a national tour of the Bicycle Ballet Company’s Mass Show; an exciting R&D exploring the potential for a new, outdoor show on tandems with blind, partially sighted and sighted performers; reCyculture projects across Kent & in Roehampton & Putney in Wandsworth; and bookings for the two touring shows, ‘the dance of cycling’ and ‘The Bunny Hop’. 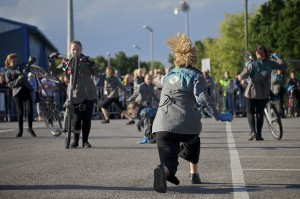 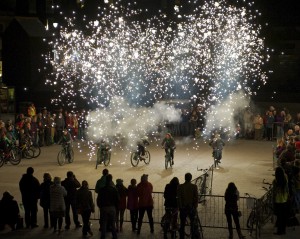 The first phase of the Tandem Ballet (working title) R&D explored the potential of the project, click here to see a short film.  A second phase in November will answer a few remaining questions. We are looking for partners to develop a full scale, outdoor, touring show in 2013. Please get in touch for further details. 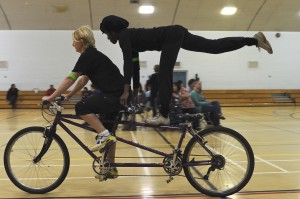 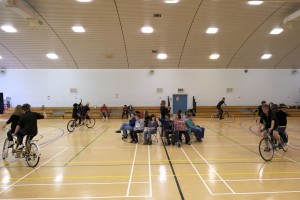 reCyculture created a series of 12 installations  across Kent, reCycling disused bikes, and creating an online, virtual layer through workshops and residencies with local people. 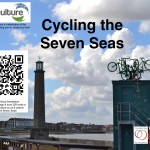 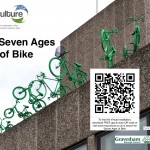 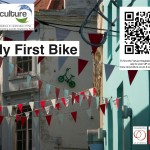 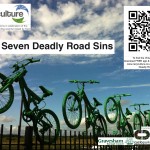 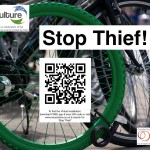 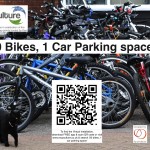 Green Horses on Putney Leisure Centre, for Wandsworth Council, as part of MOL presents, on the route of the Olympic road race. 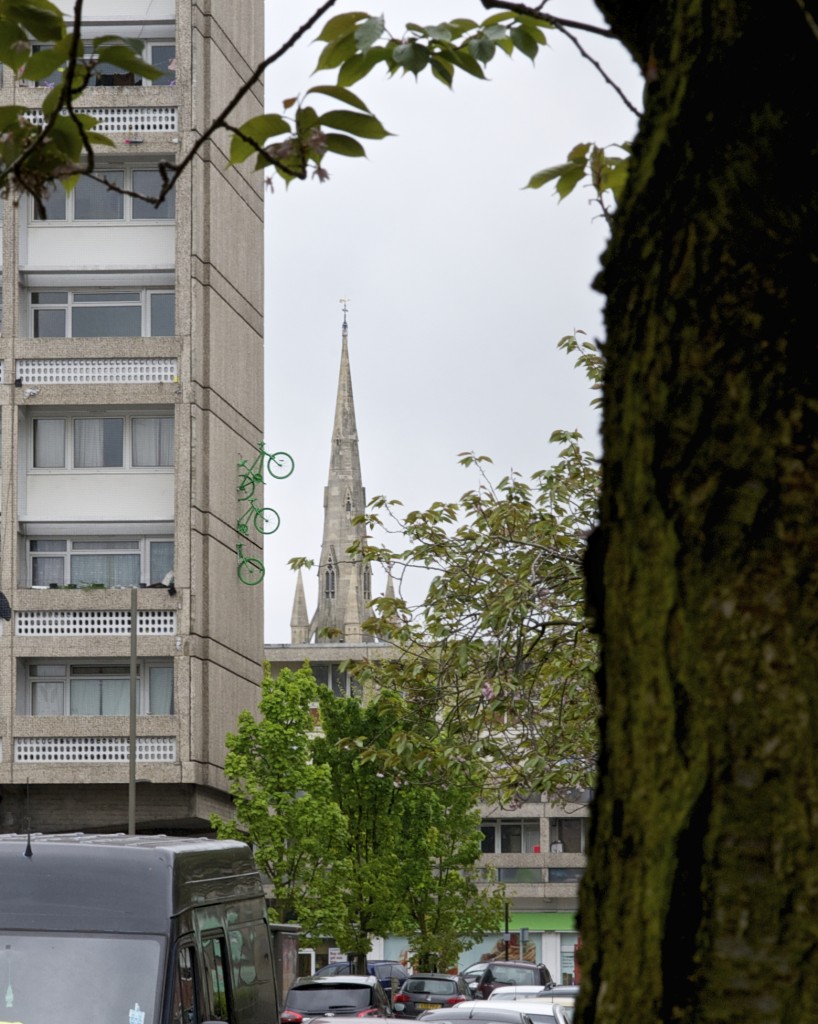 For Wandsworth Arts Festival
Green Horses on the Wall installed as part of reCyculture, around the Alton Estate in Roehampton.  Check out Chris Paradox’s spoken word response on Soundcloud. Further info here

the dance of cycling and The Bunny Hop continue to tour this year.  Further info here & here.

BUT, its not all about bikes!  Check out the Ideas Block for future projects.