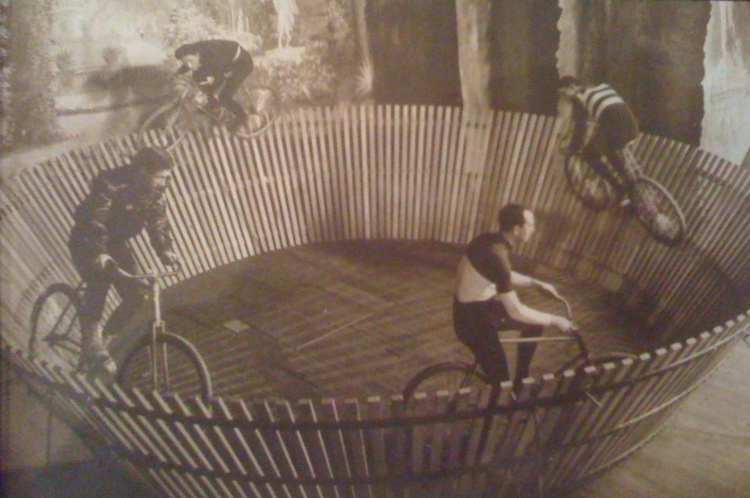 KP Projects is working with Strangelings as a Producer, assisting with strategic development and fundraising in particular.

In summer 2012, Strangelings won a Without Walls Research & Development award, for the initial development of The Rocket, which is currently underway.

Check out the blog of the work in progress:  http://thestrangelingsrocket.wordpress.com/

The Rocket
A new mid-scale street show, inspired by the high divers, human cannonballs and the  ‘Wall of Death’ shows of the traditional travelling fairground spectacles. A human powered spectacle where a couple of bicyclists, roller-skaters and dare-devils re-interpret the classic spectacles of the past.

Presented in the round from a circular, inclined track similar to a low level bicycle velodrome, where a series of spectacular and not so spectacular acts are performed by members of a 13th generation travelling performing troupe from Lancashire who have, in the tradition of previous generations, adapted to the zeitgeist of the moment and created a zero carbon human/bicycle powered show.

The Rocket will draw on clown and character led performances to present seemingly dangerous and death-defying tricks in a comedic and poetic way, drawing comedy from risk, and success from failure.  We are keen to explore the world of the travelling family to create the atmosphere of the show and the types of spectacle to be attempted building to the show’s much anticipated grand finale.

As in Strangelings‘ previous work we are inspired by familiar archetypes and traditions and attempt to re-interpret them by creating our own version of these worlds and subtly twisting them to make shows that make people laugh and are enjoyed by all ages.

Strangelings have been creating original performances since 1998.   The work has varied from subjects historically rooted in Edwardian, Victorian and circus traditions through to a live retro radio station and post-modern museum to guided tours of public gardens and interpretations of museum and art gallery collections.

We have explored many forms and scale of performance including day and evening installations, walkabouts, circle and large-scale shows. We have gained a reputation for featuring high quality and meticulously detailed sets and props combined with strong characterisation and consistency in quality.

Strangelings has built up strong relationships with many festivals, agencies and arts officers over the years who continue to support our work enabling us to tour nationally and internationally throughout the year. Since 1998 we have successfully delivered commissioned work for amongst others Arts Council England, Manchester Art Gallery, Corbis, Alnwick Garden , Liverpool City Council and Bridgeman Art Library.

David Bernstein is founder and Artistic director of Strangelings and has devised, created set and props for, and performed in, all their shows.  David is a performer, director and company manager and has worked with a wide range of street theatre, cabaret and theatre companies.  For this project David will further develop his directing skills which have previously seen him working with The Swimmers, Bicycle Ballet and Company FZ.

We will be working with Mat Burch, currently the head rigger at The Circus Space London to consult on the structure and rigging possibilities. Mat has worked with Strangelings since 2004 as a performer and rigging consultant  and has a wide knowledge of both.

We will again be working with Charlie Camm as set builder who has worked with us since 1999 on several projects and currently runs a set and prop building company in Dorset, providing services to many West End and touring theatre shows as well as outdoor companies such as Mimbre and Red Herring.

We will be looking at working with experienced devising performers that we have collaborated with in the past to maximise the research period. We like to work with people whose work we’ve been aware of and who we know we can depend upon to create work with.

We will also be working with Producer, Karen Poley on strategic development and fundraising for the project.  Karen is the Creative Producer of Bicycle Ballet and installation project, reCyculture.  She has been creating outdoor events and performances since 1996 and has worked with a range of artists and companies including Charlie Morrissey, Periplum, Magnetic Events, and Zap Art, amongst others.